These two girls came to our school from the age of six. They both did very well in their primary leaving exams and both achieved Grade 1. They then went on to secondary school where they again did very well and are presently doing teacher training.
They are now (2015) doing teaching practice at our school. They qualify next year and would like to return to teach at our school! 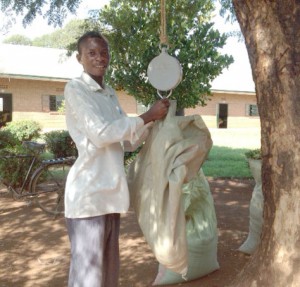 Contribution made by parents towards their children’s schooling. When they harvest their maize, they bring an agreed amount to the school. It can be brought a little at a time. It is weighed and recorded in a book. The parent is given a receipt.

The children of Bunabutye near Mbale in Uganda

The children are mainly orphaned or living with extended families in very poor living conditions.
In October 1993, the school was a mud hut where the children sat on logs on the floor and used corrugated tin sheeting for a blackboard. The teachers were unqualified.
There was no drinking water in the village, and as a result of this, many died of cholera and dysentery from drinking the river water. The nearest fresh water pump was 7 miles away.
Today – 2011 – the situation for the children of Bunabutye, has changed dramatically. Thanks to numerous donations from people in Wales and the UK, the school is providing education for 360 pupils. In last year’s exams for entry to secondary school, the lowest pupil in our school did better then the best pupil in all the surrounding schools.
EZRA needs your help to keep the project going! Read about what is going on now!

I think other web site proprietors should take this site as an model, very clean and great user genial style and design, let alone the content. You are an expert in this topic!

I like what you guys are up too. Such clever work and reporting! Carry on the superb works guys I¡¦ve incorporated you guys to my blogroll. I think it will improve the value of my web site.

I would like to thank you for the efforts you’ve put in writing this web site. I’m hoping the same high-grade web site post from you in the upcoming also. Actually your creative writing skills has encouraged me to get my own site now. Actually the blogging is spreading its wings fast. Your write up is a great example of it.

When I originally commented I clicked the “Notify me when new comments are added” checkbox and now each time a comment is added I get three emails with the same comment. Is there any way you can remove people from that service? Thank you!

Thank you for your e-mail. I tried to locate your original e-mail, but w/o success. Do you know when you contacted us?