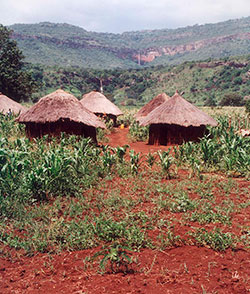 The Village and the People of the Bagisu Tribe

The Bagisu inhabit the western and southern halves of Mt. Elgon. On the west, the mountain spreads like the fingers of a hand with steep and narrow valleys between them. On the south, the land is broken and consists of a jumble of hills jammed against a high escarpment like a crumpled tablecloth. The escarpment fades gradually to a plain leading away to the northeast inhabited by the Iteso tribe.

The Bagisu- have no tradition of an early migration from somewhere. They assert that their ancestors were called Mundu and Sera whom tradition says came out of a hole in Mountain Masaba (Elgon). Their early life seems to have been anti-social, almost based on the principle “survival of the fittest”. Very little is so far known about their history but they are known to be related to a sub-group of the Luhya of Kenya known as the Bukusu. The Bagisu are believed to have separated from the Bukusu sometime in the 19th century. The tradition claiming that they have always lived where they are throughout history is not fashionable. The earliest immigrants into Bugisu area are believed to have moved into the Mt. Elgon area during the 16th century from the eastern plains.
Their earliest home is said to have been in the Uasin Gishu plateau of Kenya. They seem to have been an end product of the mixing of peoples of different origins and cultures, but since their language is Bantu, their predecessors should have been Bantu speakers as well.

The Bagisu had a loose political structure based on clans. Every clan had an elder known as Umwami we sikoka (chief of the clan). These men were chosen on the basis of age and wealth. They were responsible for maintaining law and order, and unity and the continuity of the clan. They were also responsible for keeping and maintaining the cultural values of the clan and for making sacrifices to the ancestral spirits. Often, stronger chiefs would extend their influence to other clans but no chief managed to subdue other clans into one single political entity. Other important figures in Bugisu included the rainmakers and the sorcerers. 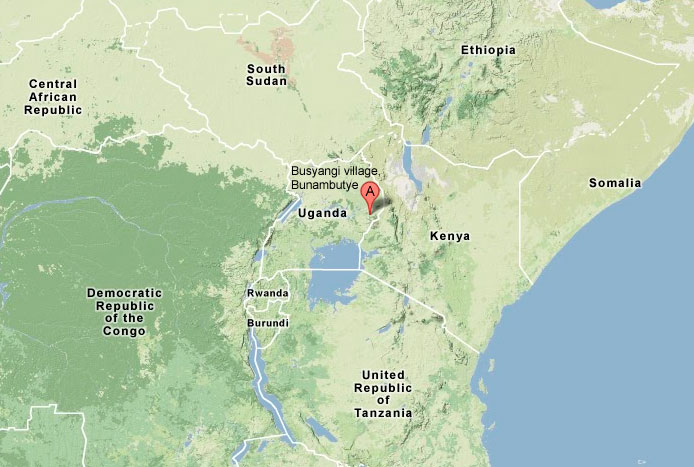 One of the unique social customs of the Bagisu is male circumcision. The actual origin of this practice is mysterious even among the Bagisu themselves. One tradition states that it originated from the demand by the Banpa (Kalenjin) when Masaba, the Bagisu hero ancestor, wanted to marry a Kalenjin girl. Another tradition claims that the first person to be circumcised had a complication with his sexual organ and that circumcision started as a surgical operation to save the man’s life. There is yet another story that the first person to be circumcised had it done as a punishment for seducing other people’s wives. Legend states that it was decided to partially castrate him by way of circumcision. When he recovered he resumed his former practices and rumour went around that he had become excellent at *. In order to compete favourably, other men decided to circumcise also.

The Bagisu are a highly superstitious people

Before circumcision, an initiate is administered with a certain herb called ityanyi. Its purpose is to arouse interest in circumcision within the candidate. Often the ityanyi is tied round the initiate’s big toe or it is put in such a place where he might jump over it unawares. It is believed that if the candidate who has taken the ityanyi is delayed or hindered from being circumcised, he might end up circumcising himself as his mind is said to be so much stimulated towards circumcision that no other thing can distract him. Circumcision among the Bagisu occurs biannually during leap years. Every male has to perform the ritual upon reaching puberty. Those who abscond are hunted down and forcefully and scornfully circumcised. Before the day of circumcision, the initiates are tuned up by having them walk and dance around the villages for three days. Their heads are sprinkled with cassava flour and painted with malwa-yeast paste. Their relatives dance with them and there is much drumming and singing.

The initiate is made to sit down on a stool and he is then wrapped in a piece of cloth. After that he is taken to his father’s house and made to move around the house before entering it. For three days, the initiate is not allowed to eat with his hands. He is fed. They say that it is because he is not yet fully initiated into manhood. After three days, the circumciser is invited to perform the ritual of washing the initiate’s hands. It is after this ritual that the initiate can eat with his hands. On the same day, the initiate is declared a man. It is then that custom allows him to marry. During the ceremony the initiate is instructed on the duties and demands of manhood. He is informed in addition that agriculture is very important and advised to always behave like a man. It is believed that the healing of the cuts depends on how many goats have been slaughtered during the initiate’s circumcision.

A ritual is performed. All the new initiates in the locality have to attend. This ritual is called Iremba. It is an important occasion which all the village people and, these days, even government officials attend. During ritual proceedings, the initiate could pick any girl and have sexual intercourse with her. The girl was not supposed to refuse. It is believed that if she refused, she would never have children when she got married. This poses problems of Christian females if they are chosen. Previously, circumcision was done in specific enclosures and only the initiates and the circumciser were allowed in. The rest of the congregation would just wait and listen from outside the enclosure. Today, however, all people are allowed to watch the whole process. Firmness the and courageous endurance on the part of initiate is appreciated as a sign of bravery.

The Karimojong are found in the Kotido and Moroto districts in the northeastern part of Uganda. They are part of the Atekerinspeaking peoples of Uganda. The origins of the word Karimoja are quite uncertain but a legend from Teso and Karamoja itself asserts that the two names Iteso and Karimojong were derived during their migrations within Uganda. In their early migrations, the Atekerin peoples are said to have come by way of Karamoja. Those who remained where the Karimojong live today came to be known as the Karimojong. The term is said to have been derived from the phrase: akarima ajong; meaning “the old men have got tired”; because the Karimojong did not manage to proceed as far as the other peoples of their stock.

Although the Karimojong have common origins with the Langi and Iteso, some elements of their culture differ greatly from those of the Langi because the Langi became more prone to foreign influences during their migratory cycle. Even among the Karimojong of today, the customs which depicted the mode of life of the traditional stock have slightly, if not greatly, been acted by the forces of change such as intercultural adaptations. Nonetheless, the Karimojong still stand as a distinct group with some elements of their cultural heritage intact.

The ox of invocation

Customarily, each Karimojong man would keep a special ox among his herd. Each man should simulate acts of bravery by invoking the aid of his special ox. He would do this by calling out the name of the ox while brandishing his spear. If a man killed an enemy or a fierce animal having invoked the aid of his ox, he was entitled to slit the ox’s ears. It was believed and feared that an ox might despise a master who had failed to slit its ears. The oxen of invocation were named according to a list of clan names or on account of colour or the shape of the horns. These oxen were highly esteemed and were valued more than parents, wives, children or other possessions. It was considered very unfortunate for an ox to die before its master. Should it do so, the owner would take off his ornaments and observe many days of mourning. If the master died before the ox, it would be killed to accompany him. Often, a man could decide to kill his special ox if he realised that it was growing very old. However, only the men belonging to the two elder groups, the Ng’itukoi and Ng’imoru could be allowed to do such a thing. Such a man would announce his intention to kill the ox. The representatives of the villages would gather on the ceremonial ground for local and inter-tribal feasts and dances. Customarily, the elders would sit behind-the circle of leaves prepared for the occasion. The sticks on which the hind legs of the animal would be placed were laid in the centre before the chief elder.

Therefore, the ox was slaughtered while its owner stood by. He would be dressed in the ceremonial dress of ostrich feathers from head to toe. He would watch but could not himself participate in the slaughter of the ox. Then there would follow dancing and invocation of oxen but as the youths recounted their heroic deeds done in the names of their different oxen, the elders would remain seated. After this there would follow a ceremonial dance which was accompanied by a series of mimed interludes performed by almost everyone present. As the dancing would be going on, the elders would be given the best pieces of meat. The delegates from the different villages would not go home that day. They would be lodged in the village of the clan to which the owner of the ox belonged. At the end of the celebrations, the revelling and feasts could continue for several days. The owner of the ox would take one new ox in the hope that it would stimulate him to fresh deeds of bravery.